That mom who does it all, on her own – she would rather not.

That mom who does it all, on her own – she would rather not.

It wasn’t an intentional choice she made to be the mom juggling all the plates with no help. She just had no help, so she learned how to do it by herself. Her husband has always been her only teammate, and he has a full time job that’s more demanding than many understand. They’re a tiny tribe of 2, raising their kids without a “village.” It’s not a big deal anymore because it’s just life.

But sometimes it is.

Some of the moments she wishes for a “village”…

If a kid gets sick, they all cram into the tiny doctor’s office, or they all go to the store to get whatever is needed. She apologizes to her toddler, over and over, praying he doesn’t throw up before they can get out of the store, or in the car. Again.

When she’s sick, the only rest she gets is between 6 pm and 5:30 am when her husband is home. There’s still meals to be cooked and toddlers to supervise.

When well-meaning people go on and on about how important it is to have a “real date night” with a babysitter and fun outside the house. Actually, in those moments she’s just praying her eyeballs don’t roll back in her head like they so badly want to. She’s been happily married long enough to determine that’s a lie.

Maybe their extended family lives far away. Maybe they have no family. Maybe their family isn’t healthy to be around for one reason or another. Possibly their own parents walked out of their lives when they chose to have more than 3 children. (Sadly that happens more often than you might think.)

That mama with the well-stocked freezer didn’t learn to make freezer meals and batch cook because it seemed fun. It saved her sanity (and her physical health) when she had a toddler and a newborn, her husband was working 80 hours each week, and there was no one to bring them meals in those early days.

That mom with the pack of well behaved kids in the grocery store? They aren’t well-behaved because they’re perfect. She’s not “brave.” They have all been doing the weekly shopping with their mother since they were each 2 weeks old. She’s put a lot of time and effort into teaching and training each child how to behave and stay safe in that situation. She didn’t have another option. Now it’s just part of the routine.

That mama who refuses to volunteer in your daughter’s second grade classroom- maybe you will understand when she shows up to every field trip with a baby strapped to her back, pushing twin three year olds in a stroller. And maybe you won’t. That’s okay too. She isn’t looking for anyone’s approval. (If you would offer to sit with the older kids while she changed the baby’s diaper, she would be very grateful though.)

That mom that doesn’t join a small group at church probably isn’t super shy (or a snob). She doesn’t have someone to watch her kids for two hours on a Thursday night. Or a Monday night. Or any night.

All the moms out there doing all their mama stuff without help aren’t supermoms. Lots of days they’re just surviving moms. They still have piles of laundry to fold and floors that desperately need to be washed. They don’t have it all together. Sometimes they’re lonely moms. Really, they’re mostly just praying moms.

It’s not that they don’t need help. They have no help. There’s a difference. Some moms just don’t have a village. And instead of whining and having a pity party (because they’ve already tried that before), they pray, they get up, and they get stronger.

It’s just what we do. 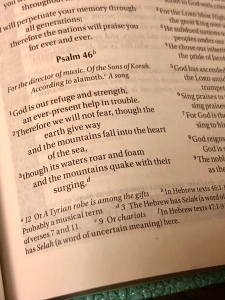