They had no idea. 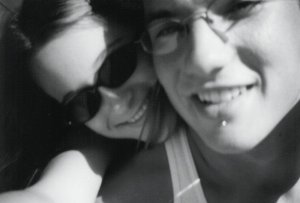 When my parents met my husband nearly 6 years ago, in the fall of 2003, they had no idea that he would one day be their son-in-law. I’m fairly certain they thought, ‘It’s just a phase.’ They were probably sure that he wouldn’t last any longer than any of my previous boyfriends. I’d say that’s a normal reaction for parents whose honor roll child just introduced them to a guy obviously older than her with multiple piercings. C’mon, how long could that really last?

A few months later, when my dad discovered that his sweet little 16 year old baby girl would soon be dating a 20 year-old man, I’m not sure exactly what he was thinking, but the look on his face sure said a lot. By that point, he’d already decided he liked Steven, so there wasn’t much he could say I guess. For the record, I never lied about his age. I said he was 19 – the truth. I simply left out the fact that he had a birthday coming up in a few months.

Then in December, he moved from Batesville to Jonesboro to be closer to me. Now if that didn’t make a parent nervous, I don’t know what would.

By February, I think they could see a hint of where our relationship was going. My dad, never one to miss an opportunity for a bit of humor, found this card for me for Valentine’s Day 2004. 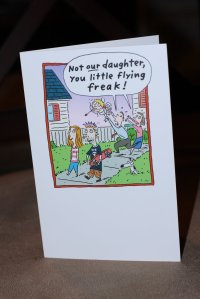 I found this card a few weeks ago while sorting through some boxes of old mementos.
It made me remember.
It made me smile.
It made me laugh.

3 responses to “They had no idea.”

Leave a Reply to The Ruff's Cancel reply